A few of my favourite things are green, such as Starbucks Matcha Latte, and this soup: 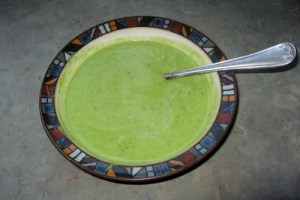 I make it for lunch in the summer, but I missed the instant zip  it provides so much, that I recently made in in the middle of January. It’s adapted from a Raw Family recipe, where it’s a main meal of the day. The mother, Victoria, says that after they started raw diet (on which a biggest meal of the day is the green soup) her husband Igor who run a spa, had let go 3 of his employees because he could do all their work and still have time left over! She also says

“On Igor’s forty-ninth birthday, he was presented with two bars on which to do push-ups. At first he was not very excited. He told us how he used to dream of doing a hundred push-ups at one time when he was sixteen years old, because he wanted to impress a pretty girl. Despite practicing diligently and consuming lots of protein, young Igor could only achieve seventy push-ups in one trial…Now he was wondering how many push-ups he could do on these bars. He was guessing maybe ten or twenty. The next morning Igor decided to check it out. He did fifty push-ups right away, stood up, and went around the push-up bars. Then he did fifty more, and more, and more. I came in after three hours to tell him that we needed to go. Igor was still doing push-ups and got upset with me, because he had almost made a thousand!

Since that time, Igor has been carrying his push-up bars with him everywhere. He does push-ups at the gas station while pumping the gas, and at the parking lot while waiting for me to do the shopping. He is still trying to figure out what his highest score could be. When he gets bored with push-ups, he jumps-rope into the hundreds. I am sure that when Olympic athletes discover the raw-food diet, many of the world records might be impressively broken.”

I did not try to do a thousand push-ups, but II can testify that in about 20 minutes after consuming a bowl of this you will have a real urge to stand up and do something. Victoria also says that her husband started growing back black hair instead of grey, but I will leave it to you to prove.

1 avocado
half of a  small cucumber or one-third of a large one
2-3 tablespoons of lemon juice (I use “real lemon”, as I am too lazy to constantly buy lemons)
a large handful of spinach
a small handful of parsley
a slice of chili pepper – I keep them frozen, slice a chunk off and put the rest back.
sea salt
water

I shake a bit of Japanese seasoning togarashi in it too, feel free to add your own staff to taste. Blend in Nutribullet or a similar high powered blender.

I eat it with rice crackers. Most people who eat these types of things are vegetarian, but don’t be shy, grate some salami or cube pepperoni into it, add croutons, bean sprouts, clamato juice, bacon bits. Let me know if you start growing different colour hair!