Cheap Umbrella for Self Defence 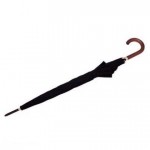 I bought my first umbrella today. I finally need one in Montreal, where the rain consists of water coming down and not of a whimpy Okanagan drizzle or Vancouver soggy “not sure what”. It came from a dollar store and cost 11 bucks. Maybe someone needs $250 unbreakable umbrella, but not me!

Now I just need to practice using it…

“Without getting fancy, the best way to use an umbrella for self-defense is to use it like a light stick. To stab/poke, to swing/strike, and to distract. Here’s a brief intro on using the umbrella as a weapon:

Keep in mind that unless it’s one of those unbreakable umbrellas, it might fall apart on you with heavy striking or grappling. It’s not a han-bo!! If it breaks, watch out for sharp pieces that can cut you, or folds that can hook your fingers or clothing. You might also end up with two pieces of umbrella mid-fight, so one can become a projectile. As far as simple routines go, try this ultra basic striking pattern: Draw an “X” continuously to strike the target (performed not so well, by the expensive umbrella guy):

Even if you’re grabbed on the wrist, you can still strike using the umbrella in the other hand (switch the umbrella from the gripped hand to the free hand if you have to). Many parts of an umbrella are soft and would not perform well as an impact weapon. So for added insurance, combine a wrist escape with your striking. Some examples of unarmed wrist escapes:

As always, proper distancing is crucial. Stay close enough to effectively strike targets on your attacker’s body, but not so close that your attacker can grab or wrap the umbrella with his arms. Backpedal while striking if you have to. Or chase your attacker until you’ve left him with enough shock or damage so you can escape safely without him pursuing you.

If your umbrella is grabbed, and you’re a smaller/weaker person, your umbrella can be used against you. To prevent this, strike quickly, unpredictably, and in rapid succession. Strike to the face, hands, throat, solar plexus, groin, feet. Use all your tools — kicks, knees, elbows, foot stomps (with the heel), dodging, talking, yelling, misdirection, etc.”