This blog is a training journal of three people who explore the world of martial arts together as a part of a larger informal group based in Kelowna, BC. We write about anything from umbrellas as self-defense weapons to multiple opponent drills to how to retrieve your stolen iPhone. Our motto is “Play, fight, thrive”. 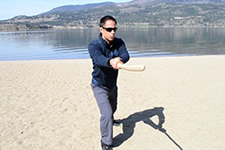 This tornado of technique, packed into an unassuming package – is brimming with shinobi spirit. Ask him to pop downstairs for a can opener and he will promptly fashion a grappling hook out of office supplies and be gone and back in 2 minutes flat. However rappelling down the sides of buildings often raises questions, so he generally avoids being seen while doing his humanitarian works.

Ðørsun has 20+ years of experience under his belts, and enjoys the most openly dynamic and practical training workout he can muster. He lives in Kelowna, BC Canada.

This fiery Russian lady with eyes that can crack even the toughest peach, loves tying everyone she knows into knots (in all senses of the words) and learning ever new ways to subdue even the fiercest opponent with the most “nut-cracking” of maneuvers. An avid trainee of multiple arts, Natalia is always willing and able to embark on every new martial challenge presented to her.

Natalia has been training several times a week since she started martial arts and enjoys nude sub-zero swimming with dolphins (though she swears this is someone else). She lives in Montreal, QC Canada 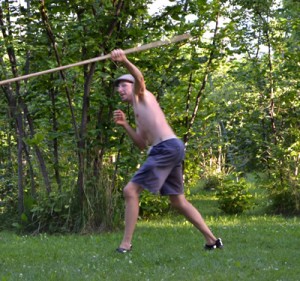 Rumored to be nicknamed the “stick with stones”, rather than hurl either at potential targets, Brante instead appreciates sneaking around, scaring the bu-jesus or bu-buddha out of everyone as much as he can. This has naturally resulted in his need to learn to defend himself from the angry mobs which generally follow him from town to town, luckily he has learned to disappear by turning sideways.

Having practiced martial arts and writing for over 10 years, after one particularly hard knock on the head, he naturally decided to combine the two. Brante lives and loves in Westbank, BC Canada